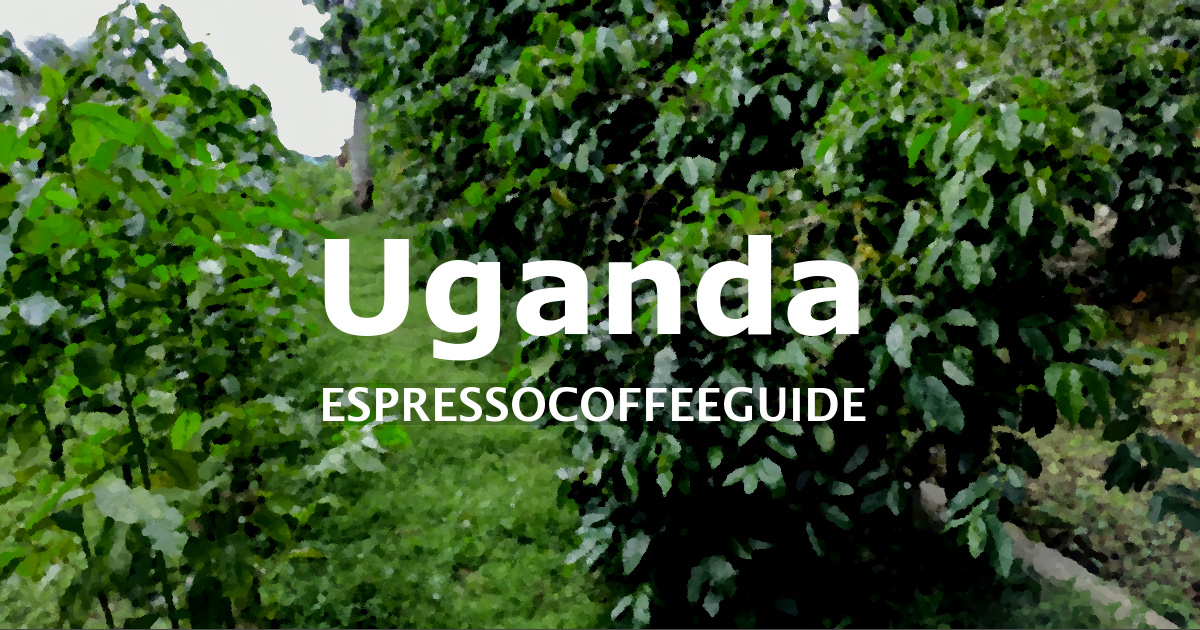 Most coffee grown in Uganda (80%) is of the varietal varietal Robusta (Coffea canephora var. robusta), with the other 20% comprising Arabica varietals Typica, SL 14, SL 28 and Kent. Also grown in Uganda is the Arabica cultivar Bugishu / Bugisu (Coffea arabica var. bugishu), which is grown near Sipi Falls on the western slopes of Mt. Elgon, one of Uganda's largest mountains.

Generally, the coffee growing regions are divided into:

The western regions produce much of the coffees Arabicas, which grow well in the higher elevations including Mount Rwenzori (which actually gets snow at its peaks). These are naturally processed ("drugars").

The Robustas from the Lake Victoria basin are well suited to the clay-rich soils, and benefit from some high elevations in the region. They're able to develop higher acidity than lower-altitude grown Robustas, making them a decent cup.

This Coffea arabica coffee plant varietal (Coffea arabica var. bugishu) is grown in northeast Uganda near Sipi Falls. Bugishu coffee is distinguished by its clean flavor and distinctive aroma. Some of the best Bugishu (or Bugisu) grows on Uganda's Mt. Elgon.

A good brewed cup of Bugishu coffee exhibits the desirably winey acidity of a fine East African coffee. However, the lower complexity and lighter body of Uganda Coffee makes it generally less distinguished than the finer coffees of Zimbabwe, Tanzania, or Kenya.

Interestingly, wild Robusta coffee trees can be found in Uganda due to their suitability to the climate. Theoretically indigenous to Uganda, Robusta is the largest exported coffee varietal in Uganda, which boasts the second largest export volume of the varietal in the world.

For tips on brewing the perfect cup of Uganda coffee see the Espresso Coffee Guides section on coffee brewing.

For easy to follow instructions on how to make great Uganda espresso drinks see Espresso Drink Recipes and the How to make a Latte. Also provided are tips on Pulling A Perfect Espresso Shot.