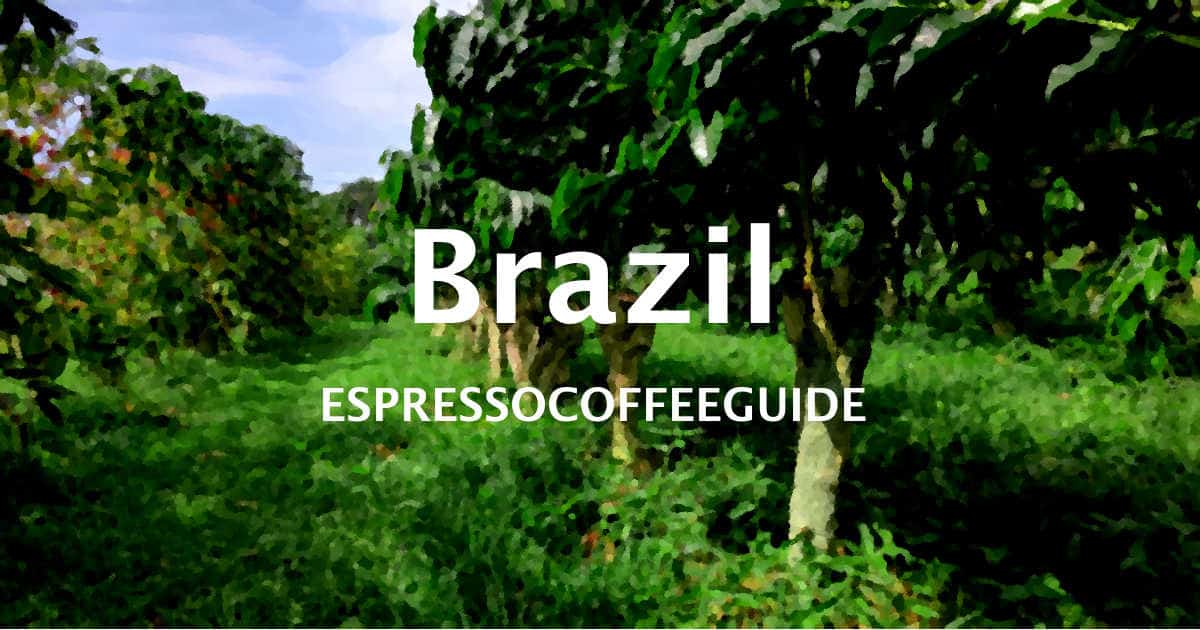 Brazil is the world's leading grower and exporter of coffee beans, with a mellow flavor that makes for a very typical dark roast.

About one-third of all of the world's coffee is grown in Brazil, and much of Brazil's premium coffee is labeled Santos after the port it is shipped through.

Brazil is the largest exporter in the world, supplying approximately 60% of the world's coffee - this is due in part to the sheer size of the country. While Brazil is a prolific exporter, it's average elevation for coffee production is only about 1,100 meters. This qualifies most of it as High Grown Coffee (900-1,200 meters), but some crops certainly fall below that threshold.

Many high quality espresso blends are made from either Bourbon Santos or Brazil Cerrado due to the ability of Brazilian coffees to take dark roasts without turning overly bitter. This is due in part to the mild, balance flavour of Brazilian coffee beans.

The most favorable quality of a Brazilian coffee is its price - but after that, the mildness helps to balance out more intense coffee beans, making it a feature of many blends.

Bourbon Santos is a medium to high quality, wet processed (washed) coffee from Brazil; usually shipped through the port of Santos. Santos is a market name.

A good Brazilian Bourbon Santos has a light to medium body, yields a low acidity, and has a very pleasant aroma. The Bourbon coffee plant varietal (Coffea arabica var. bourbon) tends to produce coffees that are fruiter and brighter (more acidic) than other Brazil coffees.

The low acidity of Brazilian Bourbon Santos derives from the region's lower growing elevations. This is low relative to areas such as Central America where higher elevation plantations (e.g., 1,500 meters above sea level) produce premium gourmet coffees that are brighter (higher acidity).

Most Bourbon Santos is grown at elevations from 600 to 1,200 meters in northern Minas Gerais or in the State of Sao Paulo, in Brazil, and is distinguished by its smooth and mild flavors, often sweet and nutty.

Since Brazilian coffees are grown at relatively low elevations (compared to Central American coffees, for example), the Brazil coffee beans are not particularly dense. This leads to a less flavorful coffee than many high-grown alternatives.

The size of the industry and volume output means that there's more opportunity for grading and classifying Brazilian coffees. They take full advantage of this, sorting by screen (size), color and cupping (flavor). This puts them into a few classifications (best to worse) - strictly soft, soft, softish, hard, riada, rio and rio zona.

For this reason bringing the unroasted green coffee beans to a Medium-Dark Roast (Vienna Roast; Full City Roast) is recommended - though roasting too dark may still cause an ashy bitterness. The upside to the mellow flavor and high production levels is that Brazilian green coffee beans are typically very affordable, making it a great base a coffee or espresso blend. The flavors of the primary coffee are allowed to shine through, while keeping costs in check.

Specialty care should be taken to buy only whole-bean coffees that are fresh roasted rather than have been sitting on store shelves. Brazilian coffees are mild flavored to begin with, and stale brazil tend to be completely devoid of flavor.

Coffees that sit on retail store shelving or in distribution warehouses (eg. Amazon) are typically roasted weeks or months before being sold. Roasted whole bean coffee should be 2-3 weeks old at maximum (if in a valve sealed bag), and ground coffee should be consumed within 1 week of grinding.

Furthermore, if you order an espresso or an espresso drink at your local coffeehouse, there is probably a predominance of coffee from Brazil in the grounds used - often up to 90% of the coffee in an espresso blend is from Brazil.

Microclimates within certain regions of Brazil can produce some outstanding coffees. In particular, some specific areas within Cerrado, Matas de Minas, Mogiana, and Sul de Minas regions are known to cultivate excellent coffee.

Minas Gerais means "General Mines", named after the gold rush in the 18th century. It is the largest coffee-growing state in Brazil, accounting for close to 50% of the total coffee grown. It's here that you'll find Sul de Minas, with it's mild climate consistently around 22 Celsius.

The "small" farms range from 10 to 100 hectares and produce almost 30% of all Brazilian coffees, known for being full bodied with fruity aromas and citric flavors.

Sao Paulo is where you'll find the infamous Port of Santos, and is composed of Mogiana, and Centre-Oeste de Sao Paulo. The altitude in Mogiana are some of the highest in Brazil ranging from 900 to 1,100 meters above sea level.

Bahia is broken into a couple regions and is the furthest North-East you'll find Brazilian coffee. It's fairly new to the game, having only started growing coffee in the 70s, but rapid deployment of technology means that it's a powerhouse in the country. Brazilian Cerrado coffees come from this region, which is primarily Arabica.

A combination of irrigation systems and consistent weather means that the coffees grow uniformly and can be harvested mechanically by large equipment, increasing the efficiency and yield.

Espirito Santo grows primarily Robusta coffee beans and doesn't get much attention in the specialty coffee market, but is actually the second highest producer in Brazil by volume. The main regions here are Montanhas de Espirito Santo and Conilon Capixaba.

Being the largest producer in the world means that Brazil is home to a huge number of coffee brands. The primary focus of the Brazilian coffee industry is quantity output, and without the same elevations as other countries, Brazilian coffees are typically more known to be good "base" coffees with mild flavors. This means they're more often used as a filler, rather than as the main driver of flavor.

Premium specialty coffees are less common as a percentage, but do exist. Good trade relations with North American and European countries means that Brazilian coffee brands with a unique product are able to export coffees direct to other markets.

Most coffee roasters in Canada, the United States, Europe and Australia will have Brazilian coffees as a key component of a blend or as a single origin itself. Here we've taken a look at some of the more worthwhile brands to consider.

Brazil's huge output means that even sub-sections of the industry are often larger than some entire countries. It's difficult to set a single standard when there are as many as fourteen major producing regions spread over 7 states.

Quality Standards for Coffee in Brazil

Generally speaking, the majority of coffee grown in Brazil is common low-altitude, low-grade Arabica - not bad, but unlikely to be considered a premium gourmet coffee. Those who enjoy a smooth, mild cup of coffee would tend towards Brazilian beans, and it is frequently used in blends by coffee companies to mellow out the flavour profile.

Recent efforts by the Brazilian government have sought to change that perception and rebrand Brazil as a specialty coffee. Organic and Fair Trade certified coffee originating from Brazil are becoming more common.

Because of the relatively lower elevations in Brazil, only very rarely is there Brazilian coffee available as Strictly High Grown (SHG), a title reserved the best beans in the world. While snobs may not appreciate this, Brazil coffees shouldn't be overlooked, as their smooth flavor make a great cup.

Improvements in cultivation methods and green coffee processing, however, may not be enough to overcome the fact that the country's non-volcanic soil is less than ideal for growing coffee, as are the lower-than-optimal growing elevations (most of the world's fine Arabica coffees are grown at higher elevations).

That said, it should be known that Brazil does grow some great coffees. A well-oiled exporting industry means that brokers always have unroasted green coffees on offer to wholesalers, distributors and green coffee importers in North America and Canada. Brazil's coffees make up the bulk of many blends provided by the biggest brands, and is also the main bean used in many grocery store coffees.

The story of coffee in Brazil begins with an intriguing tale involving a Brazilian lieutenant and his liaison with a Guiana governor's wife who secretly gave him coffee cuttings in a bouquet of flowers.

To read about the history of coffee in Brazil from its beginnings to its reign as a world coffee empire see the World's Best History of Coffee. Also see Brazil Cerrado Coffee.