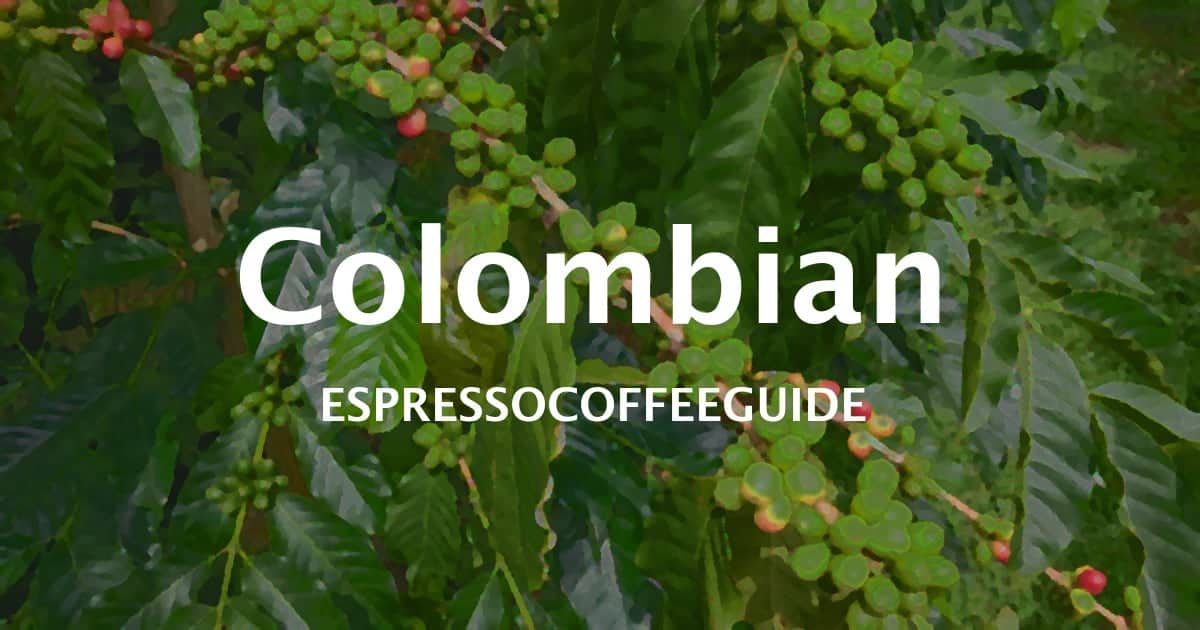 Colombia coffee reviews tend to note it as medium-bodied with a rich taste and citrus-like acidity. The best high-grown Colombian coffee typifies the classic Latin American mild, fruity flavor though not the type of fruity taste that seems almost fermented.

The high volume of crops grown in the country (Colombia grew almost 10% of the coffee in the entire world in 2015) means that these premium Arabica beans are also some of the most aggressively priced on the market, and serve as a base for many brands' blends.

The drawback to how common these beans are is that many people will find them very "mild" as they're used to the flavor.

Most standard Colombian coffee is grown by relatively small farms and then collected, wet-processed (washed), milled, and exported by the Colombian Coffee Federation.

Because of the sheer geographic size of Colombia, the harvest season varies depending on the part of the country, with most crops being harvested between September and January, but some parts happen from April to August. The consistent output leads to more stable prices and a constant supply of Colombian green coffees to the North American market.

Colombian Organic coffees are not at all uncommon, and there are also Fair Trade as well as Rainforest Alliance certified colombian coffees available on the market.

After signing a peace treaty in 2016, the guerilla group FARC (Revolutionary Armed Forces of Colombia), members have begun training as coffee farmers and baristas at Tecnicafe's coffee technology park. The group occupied Cauca, a territory going up to 2,100 meters above sea level and contains rich volcanic soil - perfect growing conditions for coffee. It will be interesting to see how disciplined, former soldiers approach coffee growing and producing.

Three of Colombia's most distinguished coffees—Medellin, Armenia, and Manizales are named after the region in which they were grown and then often marketed together in order to simplify the transfers of large coffee contracts. These coffees are known by the acronym MAM.

Cauca currently comprises about 95,000 hectares that are farmed by 93,000 families.

One of the best Colombian coffees is Medellin Supremo, which is comparable to Jamaica Blue Mountain coffee though with a higher level of acidity.

Other coffees from Colombia include Cucuta coffee (usually shipped through Maracaibo) in Venezuela, and the Bucaramanga coffee varietal which is known for its low acidity. Some of Colombia's finest coffees come from the Narino coffee-growing area in the south of Colombia.

Colombian coffees are one of those that most people will enjoy as a smooth morning wake-me-up, and work well as a medium or dark roast, depending on your personal taste preferences. We do recommend that you order from a company that offers fresh roasting - getting it to you within a week of roasting - rather than off-the-shelf.

Off the shelf coffees like those found in retail stores or Amazon will be roasted weeks or months before they get to your door, losing most of their aroma and flavors in the process.

Ordering whole bean coffee is a good idea too, which will retain flavor for 3-4 weeks in a valve bag versus days for ground coffee.

Unroasted green coffees are brought into the United States and Canada by green coffee importers, who order container-loads (40,000-lbs) at a time and then sell 132-lb bags in bulk to coffee roasters.

They work with brokers and distributors in Colombia to efficiently manage the transportation and clearing customs year-round to ensure a continual supply of fresh coffee.

Colombian coffees are known for being smooth and easy-drinking, which makes them ideal for mellowing out overbearing flavors in some other countries. Due to a wide variety of varietals and growing regions within Colombia, it's difficult to peg down exactly which flavors you'll get from any single origin Colombian coffee, but there are some patterns that repeat.

Sweet, chocolatey flavors are very prominent in most, with some fruity notes that can touch on caramel, apple and red fruits like berries.

The Colombian aromas tend to be a little citrusy and fruity at at times, have hints of spice.

Colombian coffees are very forgiving in almost any roast, making it entirely a matter of personal preference.

The relatively mild flavor of colombian coffees make it an ideal choice for espressos - they can be roasted dark without turning overly bitter. As an attractive bonus, the sheer volume of Colombian coffee available on the market means it's aggressively priced and is a good way to reduce the cost of a coffee blend while mellowing out the intense flavors.

When you buy espresso, we do recommend that you find a brand that will fresh roast it however, so that the oils don't go stale and gum up your coffee grinder.

While the two images here show relatively little change in the color of the roast, the taste is changed towards more of a darker, bolder coffee flavor, and the coffee oils have come more to the surface of the bean. Colombian coffees form the basis of many espresso blends used by the world's top coffee brands.

Coffee has been cultivated in Colombia since the early 1800s and today the country produces about 12% of the world's coffee, exceeded only by Brazil and Vietnam.

Due to the large volume of coffee produced, Colombia is a key supplier of coffees to the instant coffee market. It's known to produce a very smooth, versatile flavor that makes a great cup of instant coffee.

Starbucks undeniably relies on Colombia as a major source of quality Arabicas for their blends. It's no surprise that they've started picking out some of the best beans for their reserve program. Among these are:

Medium body with a medium acidity, these coffees have tasting notes of black currant and dark chocolate. "Penol" translates to "peak", referring to a rock face at the edge of town.

The Starbucks El Quebradon has a juicy acidity with berry flavors, and a floral aroma.


Data may not be available for the most recent year.
Source: ICO