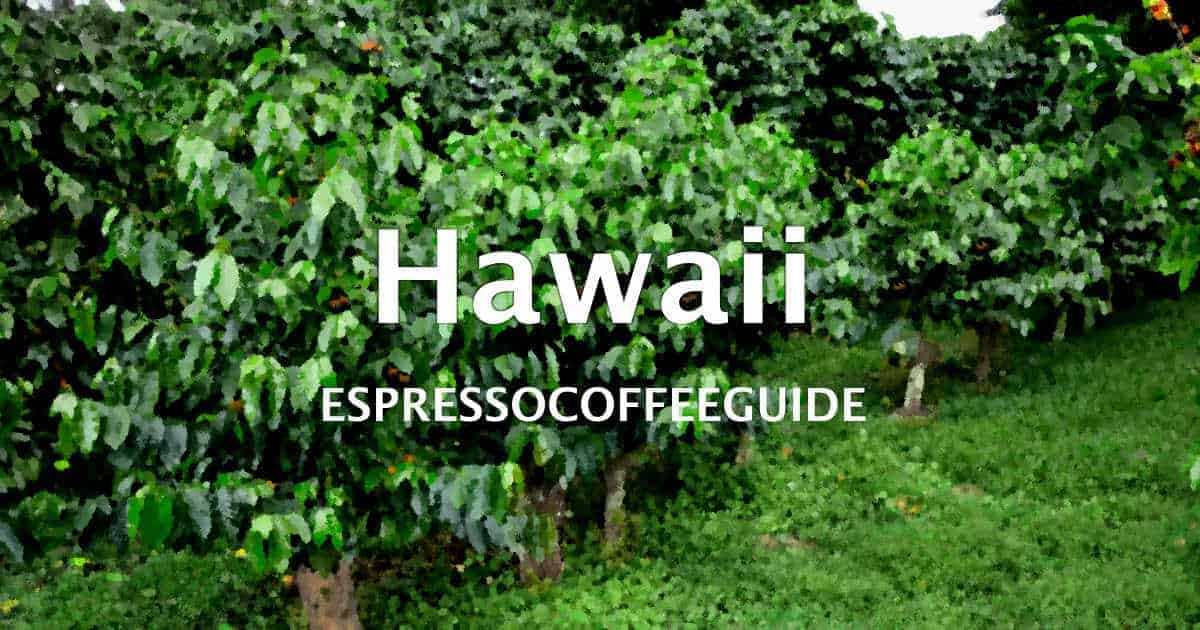 Kona coffee is a premium gourmet Arabica coffee grown in the Kona district on the western side of the Big Island of Hawaii in the United States. The area where it is grown is known as the Kona Coffee Belt, and also Kona Coffee Country.

Hawaiian Kona coffee is known for its simple yet rich flavor, typically light, delicate and mild with a complex aroma and taste.

A good Kona coffee is clean and well-balanced with a medium body and cheerful, bright acidity yet classically balanced and often exhibiting spicy and also buttery qualities with subtle winey tones, intensely aromatic, and with a great aftertaste/finish.

The finer Kona coffees are purchased from single estates rather than a mix of Kona coffees pooled for general market sale.

Though the elevations of Kona coffee farms are lower than the elevations of some of the world's top Arabica coffees, when it comes to coffee bean quality a bigger factor than elevation is how fast the coffee cherry (fruit) mature on the coffee plant, and the Kona region's growing conditions provide for a long maturation period.

The primary grades of "Type I" Kona coffee beans are:

All Hawaii Kona Peaberry Coffees are classified as "Type II", and these are in turn divided into Peaberry Prime and Peaberry #1.

Kona coffee is grown within Hawaii's Kona district in the prime coffee-growing area known as the Kona Coffee Belt, which is about 30 miles long and only about one mile wide at elevations ranging from about 500 feet to 2,500 feet along the cool and fertile western slopes of the volcanoes Mauna Loa and Hualalai.

Within the Kona Coffee Belt are some five hundred Kona coffee farms, most of them less than five acres in size. Kona's coffee mills and coffee farms are mostly family-owned ventures.

Kona coffee is hand picked at peak ripeness, with the farmers returning up to eight times per season to pick the cherry.

Once the coffee cherry are picked they are wet processed (washed) and this includes fermentation, washing the coffee beans, then drying, milling, and grading, resulting in green coffee beans that are milled but not yet roasted. The Kona coffee beans are then ready for roasting and packaging for sale.

As a premium coffee, you'll want to make sure you're getting Kona coffees as close to roast date as possible. This helps ensure that it's as flavorful as possible.

A medium roast is usually recommended, to keep the individual nuances and flavors that make Kona coffee so special.

Your personal taste preferences will ultimately decide what roast you go with, whether medium or dark. It can also be made into an espresso roast, though this makes it more generic tasting.

Subsequent to this infestation other insects may attack the coffee fruit and the coffee bean at the center of the fruit. These other invaders may cause bacterial and fungal damage.

On the Big Island of Hawaii in Kona Coffee Country there is a coffee quarantine with the goal of stopping the spread of a coffee pest called the Coffee Berry Borer which has been discovered on many Kona coffee farms.

Valued for their robust flavor, Kona Peaberry are the rarest type of coffee beans and have a higher density than Type I Kona coffee beans. Coffee brewed from Hawaii Kona Peaberry is known to have a smooth consistency and rich aroma.

Peaberry are typically separated from the rest of the coffee crop and sold as a higher grade of coffee bean. Kona Peaberry beans are considered the “champagne of Kona coffee” and usually sell for a higher price.

Peaberries are not necessarily better than the other grades (Fancy, Prime), they're simply less rare. They're sorted out during the sorting process so that roasters can ensure a consistent roast, as their unique size would cause an uneven roast development if mixed with standard beans.

This may be due to the peaberry's ability to get more nutrients from the coffee plant while developing within the coffee cherry. The peaberry bean may also roast differently due to its different shape.

Grades of Type II Kona coffee include Peaberry Prime and Peaberry Number One, sorted by size, moisture content, and purity of bean type.

How much coffee is produced each year in Kona?

This prime coffee growing area is known as Kona Coffee Country, and it's a great place not only for visiting coffee farms and meeting farmers, but also for seeing an area with a rich history and traditions of coffee growing.

The first coffee was planted in Kona in 1828 by Reverend Samuel Ruggles, an American Protestant missionary who had originally come to the Islands with the First Company of American missionaries.

Eventually the Kona coffee industry took hold, and Kona coffee began its rise in rankings to become regarded as one of the world's premium gourmet coffees.

For example, the Kona Coffee Living History Farm features a farm tour that relives the days of the pioneering Kona coffee farmers in the 1880s, and hands-on activities make it fun for kids. At the H.N. Greenwell Store Museum you can see what a real store was like in that time period more than a century ago.

Kona also has a number of organic coffee farms and a great deal of diversified agriculture with many fruit and nut trees planted among the coffee orchards. Many farms also raise animals from sheep and goats to ducks and chickens.

A visit to Kona Coffee Country is also a a great way to get some freshly roasted coffee right from the source. Every November you can check out the Kona Coffee Cultural Festival, a 10-day series of events including everything from a coffee-picking contest to a parade, beauty pageant, and coffee cupping contests.

For tips on brewing the perfect cup of Kona coffee see our section on coffee brewing. You can also read detailed coffee flavor profiles of Specialty Coffees and instructions on preparing Espresso Drink Recipes.

For detailed instructions see Pulling A Perfect Espresso Shot and also How to make Lattes and Cappuccinos.