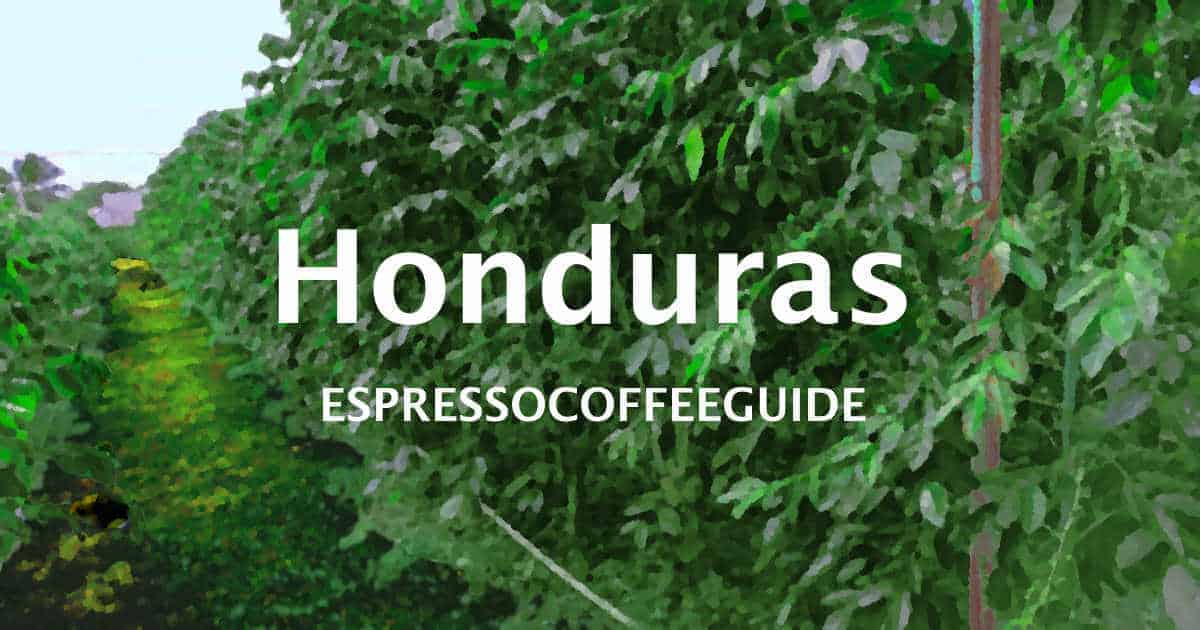 Coffees grown in Honduras, which borders Nicaragua, El Salvador and Guatemala, generally having tasting notes describing them as full-bodied with a sweet and mild taste.

Much of the coffee grown in Honduras historically was fairly unremarkable and often used as a base in coffee blends, however it has emerged as a force in its own right in coffee reviews in recent years and is often sought after.

Due to a lack of infrastructure, Honduran coffees were typically sent over to neighbouring Guatemala to earn a higher price. With investment from the government into education and processing techniques, as well as infrastructure such as roads and government programs, Honduran coffees are now recognized the world over - all within a few short years.

They can be bought from most large green coffee importers.

Typically wet processed (washed), Honduran coffees are graded based upon the altitude at which they were grown and classified as either

Coffee varietals grown in Honduras include the “old Arabicas” Bourbon and Typica as well as Caturra.

Honduran coffees run the range of soft and nutty to bright and vibrant, making them difficult to identify in blends. More often than not, brands will feature them as their own single origin coffee. The best Honduran coffee will be the Strictly High Grown grade - these altitudes allow the coffee to grow slower, increasing the mineral and nutrient uptakes and developing a fuller, more robust flavor of coffee.

Taking it a step further, you could also look for Bird-Friendly or Shade-Grown coffee, which intersperses other trees with the coffee trees to create shade and further slows the coffee growing.

When buying roasted beans, we recommend ordering whole bean to best preserve flavor, and making sure you're ordering from a coffee roaster who offers roasted-to-order so that you get it within days of being roasted, while it's at its peak flavor.

Avoid pre-roasted brands that sit on store shelves or warehouse shelves (eg. grocery store, Amazon) as coffees that are roasted weeks or months prior tend to be stale and relatively tasteless.

With the Caribbean Sea to it's north and Pacific Ocean at the southern tip, most of the coffee growing regions are closer to the center with its mountain ranges. Honduras coffees are grown mostly towards the western side of the country, bordering on Guatemala and El Salvador. Due to still being a fairly emerging market, not many regions are well recognized and most coffee is sold simply labeled from Honduras. Some of the more notable regions include:

Honduran unroasted green coffee beans can be sourced from most green coffee importers and brokers, given that the country now produces almost 4% of the coffee world wide. The high growing elevations and investment in the country means that Organic coffees are easy to find, and SHG are not uncommon.

Coffees from Honduras are fairly standard as far as Central American coffee ratings go, on equal footing with Guatemala, El Salvador and Nicaragua. Depending on the region they're from and the varietal, they will have certain nuances and flavors that are more prominent in some tastes than others.

Coffees from Copan are known for having a chocolate flavor and balanced body, while those from Opalca are also balanced, they're more fruity (grapes, berries) with a fine acidity.

Montecillos coffees are reviewed as having a sweet, fruity fragrance that is matched by a lively acidity and orange+peach flavors.

Comayagua are similar to those from Montecillos with a vibrant acidity and sweet+citric flavors that are matched by the aroma.

Coffees from Agalta have tasting notes of tropical fruit and caramel that lead to a sweet aftertaste, with chocolatey aromas.

Those from El Paraiso offer a balanced, sweet/citrus flavor and aroma along with a soft body and good acidity.

Starbucks has featured Honduran coffees through their Starbucks Reserve program as "Honduras Premier". The coffees were the Pacas and Typica varietal grown from 4 farms in San Marcos, Honduras all above 1,000 meters above level. Tasting notes indicates it has a creamy texture with honey and toffee flavor and pairs well with nuts or foods with a heavy brown-sugar, molasses flavor. It's not currently available.

The earliest reported plantations in Honduras date as far back as the early 19th century, where it arrived from the Caribbean. It was introduced under then-Spanish ownership, but really started gaining ground off after gaining independence. It was second to Banana exports, which were owned and driven by larger U.S. companies up through the 20th century. In the early 2000's, the Coffee industry finally gained legs and is considered a primary cash crop along with Bananas.

Coffee farms are owned and operated but a huge number of independently operated farms. Recent estimates puts the number around 110,000 farmers - over 90% of them small. These farms in turn support roughly a million jobs during the coffee harvesting and processing season (between November and March).

If you want to brew an awesome cup of Honduras coffee see our section on coffee brewing. Then check out the taste profiles of Specialty Coffees and detailed instructions on preparing Espresso Drink Recipes.

For step-by-step instructions see Pulling A Perfect Espresso Shot as well as How to make Lattes and Cappuccinos.