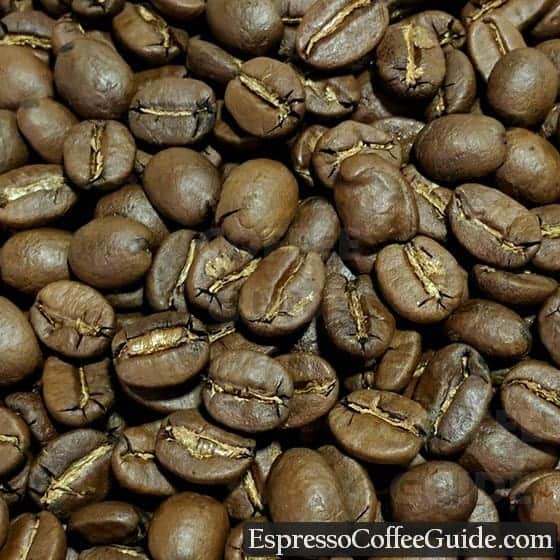 One important coffee growing region is located in the eastern part of Cuba in the Sierra Maestra Mountains where the climate is favorable and the fertile, reddish-brown soils rich with humus allow coffee cultivation without the need for chemical fertilizers, and indeed Cuba has a good reputation for organic coffee.

Towns in the Sierra Maestra have a history of coffee cultivation with the harvest done by hand-picking. Many of the coffee plants grow on steep hillsides and the coffee beans are carried out of the area in sacks on the shoulders of coffee farmers and then carried by mule to drying areas.

The traditional coffee preparation method among the mountain people is to roast the beans and then pulverize them in a wooden "Pilone." Then the coffee is steeped in hot water and the grounds strained out using a cloth handbag.

Another main coffee growing region in Cuba is the Escambray Mountains in the center of Cuba. In the west coffee is growin in the Guaniguanico and in the east coffee is grow in the Nipe and Sagua-Baracoa Mountains.

Difficulties in Cuba coffee growing include excessive rainfall followed by drought and poor roads. The use of mules for transport and traditional processing methods are still commonplace. The poor roads also hinder access for needed labor on coffee plantations.

The United States prohibited the importation of Cuban coffee until 2016, when President Barack Obama began easing trade embargoes with Cuba. Some companies market coffee beans as Cuba coffee though the beans come from other countries.

The unique taste of a Cafecito is created due to the heat of the espresso hydrolizing sucrose causing a sweet taste that differs from the taste created by adding the sugar at the end.

In the mid-1700s coffee growing was introduced to Cuba and by 1790 significant amounts of coffee were being exported to Spain. Cuba's coffee industry grew even more when French coffee farmers who had fled the Haitian revolution began farming in Cuba.

Coffee sales exceeded Cuba's sugar sales in the 1820s and by the early 1950s coffee exports reached 20,000 metric tons. The Cuban Revolution of 1956 nationalized the coffee farms and the industry began to decline.

Cuban coffee production continued to languish during the 1960s and 1970s and then surged in the late 1970s and into the 1980s. The principal benefactor of Cuba was the Soviet Union and with the fall of the Soviet Union in 1990 Cuba's coffee industry again waned.

However this is coffee is clearly named for the method used to brew the coffee and not the coffee beans, which are typically Brazil or Colombian coffee beans, and most surely not Cuba coffee beans since that would be illegal and there are severe penalties.

The drink "Cuban coffee," also called Cafecito, Cafe Cubano or Cuban espresso, is a type of espresso coffee that first developed in Cuba after Italian espresso machines began appearing in the country.

A Cafecito may be prepared using a traditional espresso machine or an Italian moka pot (macchinetta).

The Cafecito (Cafe Cubano; Cuban Coffee) beverage is made by sweetening an espresso shot with demerara sugar, during the coffee brewing process. There are variations on the method including a variety of recipes using a base of Cuban espresso.

The demerara sugar is traditionally added into the vessel into which the espresso will drip so the sugar and espresso mix during brewing which is said to create a sweet and smooth quality.

Cuba has focused on exporting authentic Cuban coffee beans to the Japanese market along with Italy, France, Germany, Spain, the UK, Switzerland, the Netherlands and Canada.

Still the total value of Cuban coffee exports is a mere one percent of the Cuban economy which remains markedly lower than before the Cuban Revolution when it was about 4%. The coffee import ban due to the embargo on all Cuban goods went into effect in 1963.

The coffee plant varietal is Arabica and the harvest season is from July to February.

Among the Cuban exile community (e.g., in Miami) and in Cuba the consumption of Cafe Cubano (Cafecito) is a prominent daily cultural and social activity.

Four to six shots of Cuban Coffee served in a large glass along with numerous small demitasse cups is known as a Colada and intended for sharing.

In some social circles the tip of a Cuban cigar may be lightly dipped in the bottom of the demitasse and then lit.

While Cuban Coffee has traditionally been banned from being imported into some of the world's largest markets, changes in the U.S. in 2016 mean that demand will likely surge going forward, leading to a price increase until supply catches up - which could be up to 5 years as the coffee plants mature.

Data may not be available for the most recent year.
Source: ICO
FacebookTweetPinShares116