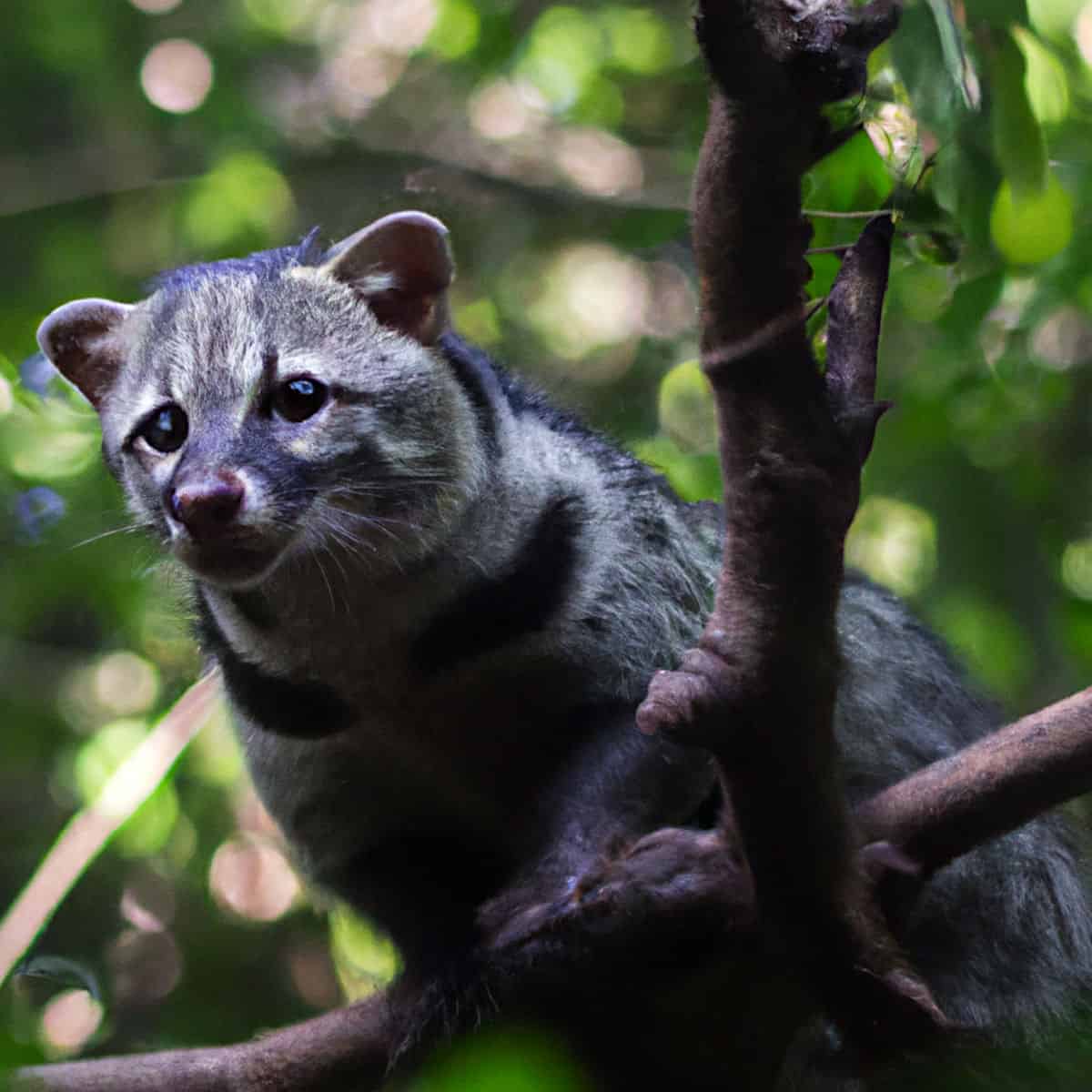 The unique tastes and aromas of Civet coffee are likely the reason the coffee has gained such a wide popularity despite the initial off-putting knowledge that the coffee has previously been expelled from the anus of a small mammal called the Civet and then the excrement gathered up and prepared for your cup.

That's right: pooh to brew! Civet coffee known for its high aroma (in this case, he whole smelt it dealt it and should be proud), smooth taste, and low acidity – often quite sweet and very full in the cup – civet coffee is made with coffee beans that are retrieved from the excretion of an animal called the civet.

The civet's unique ability to select only perfectly ripe coffee cherry (fruit) to feed upon helps to ensure a consistent high quality of coffee beans.

This natural selection process for the best quality coffee beans is one of the reasons why wild-collected civet coffee has such a smooth flavor profile and aroma which may not be the same with farm-raised civets that are fed coffee beans picked by farmers.

A good Civet coffee is full-bodied, quite heavy and full in the cup, and perhaps even a bit syrupy. Civet coffee has a pleasant sweetness that may reveal hints of chocolate and a subtle caramel taste.

One of the most pronounced characteristics of civet coffee beans is their natural lack of bitterness, so they are only lightly roasted to preserve their complex flavors. This light roasting also reveals rich and strong aromatics. The high aroma can be thought of as priming the taste sensors and the complex flavors give way to a lingering finish, a long, clean ftertaste.

Civet coffee from different regions and made from differing coffee plant varietals will reveal distinctly different qualities, although the common factor is usually the coffee's naturally low bitterness which is why it only requires a light roast.

A fine Civet coffee lightly roasted is allowed to exhibit its origin flavors and premium gourmet qualities which shine through since they are not masked by roasting tastes as with darker roasts.

Civet coffees from different regions have their own distinct tastes and aromas. There are also variations depending upon whether it is wild Civet coffee (in which the Civets are allowed to choose which coffee cherry they eat), or Civet coffee produced in some other way. For example,

Some Civet coffee farmers will mix the coffee beans with banana mash before feeding the mix to the Civets with the goal of increasing the fermented end product. The result is a smooth, aromatic, and very pleasant tasting cup of brewed coffee that often reveals hints of chocolate and other nuanced flavors.

The mellow brew is also said to reveal distinct nutty and oaky flavors not present in other coffees.

The coffee beans pass through the civet's digestive tract where the outer fruit is mostly digested, and then the beans are then defecated onto the ground. Coffee farmers then collect the coffee beans and usually wash and sun-dry them.

The Asian Palm Civet produces a unique coffee by eating the ripest beans (in the case of wild Civet coffee) and then marinating those beans in its digestive tract before expelling them onto the forest floor. A quick wash, sun-drying, and light roasting and the beans are ready to go!

Where do Civets live?

Civet coffee produced in the Philippines is known as Kape Alamid (in Tagalog regions) and Motit Coffee (in the Cordillera). Civet coffee is popular in coffeehouses in Vietnam where there is even a market for simulated civet coffee.

Civet coffee has developed a reputation in places like the United States, Canada, the U.K. and Australia for its price and its novelty.

One civet coffee found in the Philippines and other locations is called Kape Alamid (Tagalog translation of civet coffee) and is produced using Arabica (Coffea arabica var. arabica) as well as Liberica (Coffea liberica) and Excelsa beans.

While this coffee does have the typical characteristics of civet coffee – high aroma, smooth taste, low acidity – it also has other distinct characteristics that create a unique flavor profile.

The largest regional producer of civet coffee is Sumatra, where the coffee plants are mostly the Arabica varietal (Coffea arabica var. arabica), though there are small quantities of Robusta and Liberica in some parts of the world. Some Sumatra civet coffee farms produce wild civet coffee while others produce farmed civet coffee by constraining the civets within defined boundaries.

Civet coffee, which is made from coffee beans that have been defecated by the Civet animal, is served in Vietnamese coffeehouses by the cup. In Vietnam the Civet coffee is known as Ca Phe Chon, a name that has the rough translation of “Weasel Coffee.”

Vietnam has also seen a rapid increase in the demand for Simulated Civet Coffee which is made by a company called Trung Nguyen which isolated the Civet's digestive enzymes and now uses their patented synthetic soak made using the enzymes to create the product they call Legendee.

In southeast Sumatra's Lampung province Trung Nguyen uses Arabica coffee beans to produce Kopi Luwak (Civet Coffee). During the day the Civets are allowed to forage on the coffee cherry which have been set out into large courtyards. Then the Civets are caged again in the evening.

Specific proteins that normally give coffee a bitter taste are broken down by the enzymes, resulting in a less bitter coffee and allowing the coffee's notable highlights to shine through when the coffee is given a light roast.

While some people are concerned about civet coffee's potential bacterial contaminants (e.g., E Coli), others claim that civet coffee is perfectly safe because the civet's stomach enzymes help to eliminate the bacteria, as does the washing, sun-drying, and the high temperature of the roasting.

Civets are classified as Paradoxorus Philippinensis (an endangered species) in the Philippines, but in Sumatra they are in the family Viverridae.

The civet has been compared to animals in the cat family and also the weasel family, though it is not related to either. One of the most numerous types of civets on civet coffee farms is the Asian palm civet (Paradoxurus hermaphroditus).

Civets go by a number of names locally, including:

Civets aren't the only animals that are utilized for their coffee bean processing abilities. Defecated coffee beans are also gathered up from the feces of wild Muntjac (barking deer) in Indonesia and Malaysia – this coffee is known as Kopi Muncak (or Kopi Muntjak).

Elephants and birds (Jacu) have also emerged as sources of pre-digested coffees.

Arengga is typically given a medium roast before being vacuum-sealed in a one hundred gram bottle. This Civet coffee is known for its fruity and floral tones and mildly earthy flavor as well as a distinct aroma.

Civet Coffee is one of the world's rarest coffees, as well as the most expensive, selling for up to $600 per pound on the world coffee market. Civet coffee is also sold by the cup in many coffeehouses in Southeast Asia.

While a price nearer to about $300 per pound is more reasonable for Civet coffee, it depends upon the supplier.

Would you believe people have paid more than $1,400 (in U.S. dollars) for one pound of coffee beans? It's true! A harvest of Motit Coffee in the Philippines garnered this price in 2009. And Civet coffee has also been sold for $100 per cup!

How much do Asian Palm Civets weigh?

A typical Civet weighs about seven pounds, or three kilograms.

How long is a Civet?

The average Civet is about 21 inches, or 53 centimeters long, and with a tail that measures about 19 inches, or about 48 centimeters.

One of the foods in the Civets natural diet is the sap of palm flowers. A sweet liquor made by fermenting this sap is known as toddy. This is why Civets are sometimes called Toddy Cats.

When are Civets most active?

Asian Palm Civets are typically very active at night beginning at about 6 pm and extending all the way until about 4 am. If there is a bright moon in the sky the Civets may be less active than on darker nights.

What do Civets eat?

The typical diet of a wild Asian Palm Civet includes various berries and pulpy fruits such as the fruit of ficus and palm tree as well as chiku, mango, and rambutan as well as the sap of palm flowers.
When the fruit of coffee trees (coffee cherry) is available the Asian Palm Civet will eat it. In addition to fruit, the nocturnal omnivore Civets will also eat seeds, insects, and even small mammals.

The civet isn't actually a cat, but does look similar to one. The coffee beans are indeed pooped out by the animal, which eats the fruit that surrounds the coffee beans. The beans aren't digestible however and come out mostly whole, and are then picked out by farmers and foragers, cleaned and sold.

Since Civet coffee beans don't have much bitterness due to pre-digestion, they don't need much roasting. Ligher roasts will preserve as much of the originally characteristics as possible, which is important, given the cost of the coffee.

Organic, shade-grown coffee is cultivated in in a highland coffee forest in North Luzon in the Cordillera Mountain Range in the Philippines as part of a Civet Conservation Project. Wild Civets feed on the fruit (coffee cherry) of these trees which are grown organically among the other flora of the region.

The goal of the project is to provide income for local farmers while also helping to preserve the wild Civet population.

This work is occurring on 24 hectares where coffee trees grow within the natural forest of the 40-hectare Julia Campbell Agro-Forest Memorial Park and the wild civets are able to selectively choose just the ripe fruit which improves the quality of the Civet coffee that is produced by the animals.

The Philippines Civet Conservation Project area in the Cordillera Mountain Range borders the Ifugao Province in North Luzon, an area known for its ancient rice terraces.